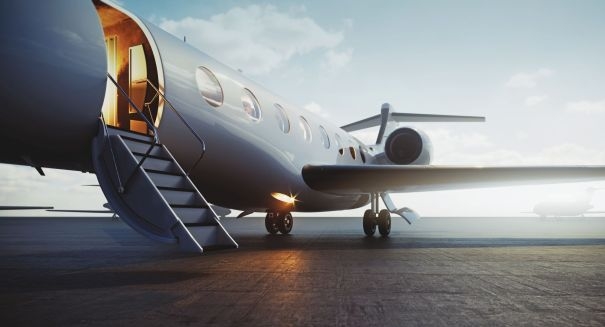 Since the spring of 2020, about the last place in the world where anyone has wanted to be is inside a major airport, waiting to board a jumbo jet. Of all the locations where you might catch a lethal airborne virus, the place that makes you wait in long lines; that can lock you in crowded terminals with the exhaled breath of thousands for hours; and that packs you into a flying sardine can with hundreds of people is bound to rank pretty low on most people’s list—somewhere between “rush hour subway car” and “sold out arena rock concert.”

For that reason, private air travel—despite its high cost—has found an eager audience among cautious travelers. The appeal is obvious: No waiting in airport lines, anxiously trying to maintain social distance. No taking off your belt and shoes. And while any public activity during a pandemic is risky, many travelers are attracted to the theoretically safer private option. The Austria-based charter airline GlobeAir issued a study claiming that a passenger traveling on a commercial aircraft has 700 potentially infectious encounters; on a private jet, the company says, it’s 20.

So, while fewer people overall have been flying since early 2020, the percentage of flyers choosing private jets has gone up. As a result, 2020 was not the disastrous year for private aviation one might have predicted. In 2019, the size of the U.S. private aviation market was estimated at between $25 and $30 billion. 2020 was no doubt a year of shrinkage; some companies have indicated that in the spring of 2020, as the pandemic lockdowns kicked in, business fell to 10 percent of its 2019 level, akin to the dramatic drop-off in commercial travel. 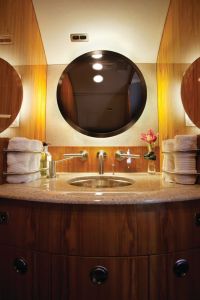 But while commercial airline travel remains deflated, the private aviation industry has actually surpassed, by many yardsticks, its pre-pandemic level. Partly this is because there were periods of pandemic reaction in 2020 that tilted toward private aviation’s affluent demographic: Americans coming back to the U.S. from abroad; university students returning home when their campuses shut down; people leaving cities for second homes to ride out the lockdown; and holiday travel.

So even while tens of millions of Americans worked from home and largely shut down demand for any type of business travel, leisure travel kept private aviation humming. VistaJet Chief Commercial Officer Ian Moore says his company had 30 percent more new customers in 2020 than in 2019. According to Doug Gollan, founder and editor-in-chief of Private Jet Card Comparisons, charter aircraft activity during the 2020 Fourth of July weekend actually surpassed its 2019 level. And it’s only become stronger since. “This past March was a record month in terms of charter flights,” Gollan said. “By the time we get to the summer, there could be a shortage.”

This means that the profile of the typical private aviation customer has shifted somewhat, from business traveler to leisure traveler—although for some providers, this isn’t a shift at all. Aero, a San Francisco-based private jet company that launched in 2019, focuses exclusively on leisure travel and experienced almost no negative COVID impact at all. “Our business has been accelerating much more quickly than we would have anticipated had COVID not happened,” says Aero CEO Uma Subramanian.

The changing dynamic in the private aviation customer base has also led to a flurry of activity in the industry. Wheels Up, for example, has been on an acquisition spree for two years, including its January purchase of Mountain Aviation, which had been the country’s 10th largest private aviation company. Gollan points out that there is still plenty of room for consolidation; he says that the top 10 carriers account for only 25 percent of the private aviation market, while the top 10 commercial carriers account for more than 90 percent of the market.

The industry’s big question now is: Assuming commercial aviation bounces back, what will happen to the private carriers? Megan Wolf, COO of Flexjet, argues that private air travel is the ultimate “sticky” service; once travelers become accustomed to its comfort and convenience, they are unlikely to want to get back on a commercial plane. That’s probably historically true, although the proposition has never been tested at the scale that’s about to hit. Gollan surveyed his subscribers in January and found that 96 percent of those who began flying private during the pandemic plan to continue when the pandemic ends, with 41 percent saying they would do so regularly.

Given some predictable attrition of those newly acquired leisure customers, that still leaves a lot of private carriers betting on the comeback of business travel—which is a very open question in the COVID era. If the past year-plus has shown anything, it’s that a great deal of business that once entailed travel can be conducted via Zoom. Of necessity, everything about business travel has changed—not just business trips, but even coming into an office. In early 2020, one Silicon Valley company weighed its options when an executive assistant—a young mother with a punishing commute—asked to work from home one or two days a week. “We almost let her go,” an executive admits, noting that just a month later, practically the entire company was working from home every day. Even hiring—which was once close to unthinkable without an in-person meeting—is now routinely done over Zoom.

Of course, just because executives can conduct most business remotely doesn’t mean that they want to, or that it’s the best method. Arguably, the reliance on video meetings makes in-person meetings all the more valuable, and a lot of business executives are worried about losing relationships with their customers. Historically, the most efficient use of private aviation for the thousands of businesses that don’t have their own planes has always been the multicity visit to customers. For example, a private jet rental makes it cost-effective for a corporate team to fly, say, from New York City to Cleveland to Pittsburgh and home again in a single day, with no hotel expense. That private aviation advantage will remain even when commercial travel rebounds.

Related to this is that thousands of corporate leaders have not visited their remote affiliates in person in more than a year. Flexjet’s Wolf labels this “pent-up demand” and says that her company has spoken to several corporate clients who are already planning these trips.

So while COVID introduced panic and uncertainty into almost every industry across the globe, the world of private aviation believes it is flying into a very bright future.