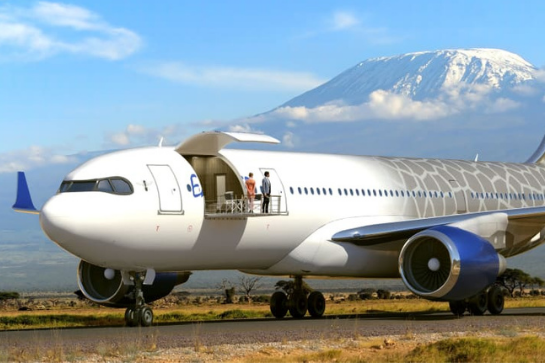 A helicopter with vegan seats, a private jet with a sundeck and garage, and a hotelier's plan to hold discos at 35,000 feet -- all three concepts were unveiled at the Dubai Airshow last week among a host of others designed to lure VIP travelers back to the sky.

Despite the aviation industry being among the worst hit by the global pandemic, and criticism over its role in the climate crisis, demand from rich jetsetters show no sign of abating.

Lufthansa Technik, an aircraft overhaul specialist and sister company of the German airline, wants to offer a private jet that provides the same experience as a superyacht, taking owners anywhere at any time while also providing the comforts of a five-star hotel and base camp for leisure activities.

At the Airshow, it showed off its "Explorer" cabin concept for a wide-body Airbus A330, that includes a retractable sun deck (that only opens when parked), four double bedrooms, a gym and a garage. 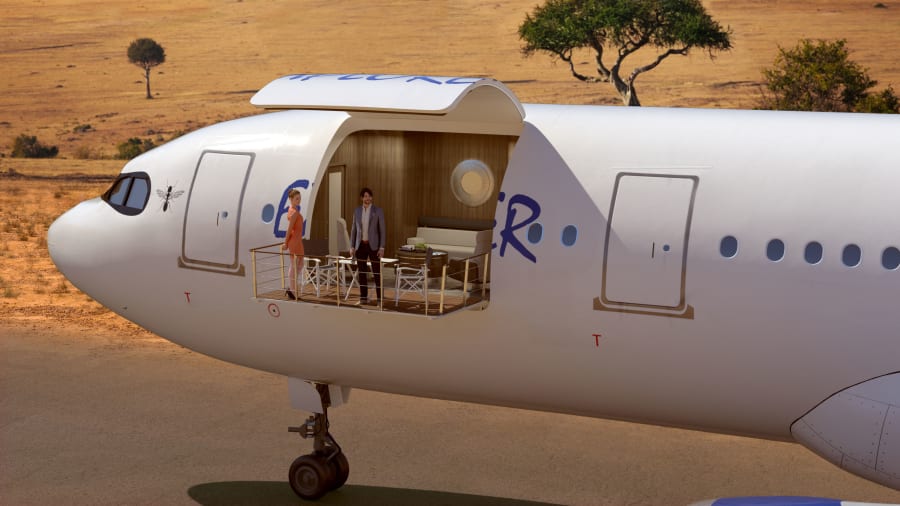 "We came up with the idea to show an aircraft which is like a flying hotel, so that guests who are chartering the aircraft can have a round-the-world trip in two weeks," says Wieland Timm, head of sales for VIP & special mission aircraft at Lufthansa Technik. That way it would be a faster luxury travel option than a superyacht, he adds, allowing passengers to visit different corners of the world within hours.

But such a service comes at a hefty price. Lufthansa Technik estimates it would cost €100 million ($110 million) to fit the cabin in a 200-foot-long Airbus A330, on top of the cost of the aircraft which is usually listed for upwards of $230 million. "It's a very big investment," says Timm. 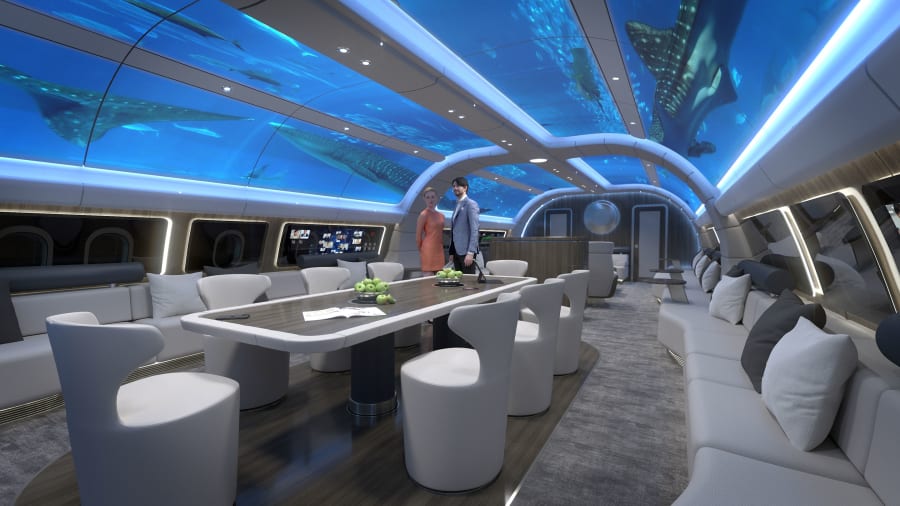 Another, perhaps more affordable, "flying hotel" option was presented by FIVE, a Dubai-based real estate group which runs a chain of luxury hotels and resorts in the city. During the Airshow, it purchased an Airbus ACJ TwoTwenty, which it wants to use to ferry guests around the world from 2023.

Before then, it will be revamping the 786-square-foot aircraft, complete with a dining table for eight passengers and a kitchen where gourmet cuisine from Dubai's best restaurants will be served. The hotelier's in-house DJs will perform on board and there's a suite with a king-sized bed for whoever wants an early night.

The boom in private jets
These concepts are capitalizing on the soaring demand for luxury jets. During the pandemic, as commercial aviation slumped, wealthy travelers who wanted to avoid crowded airplanes or the uncertainty of commercial flights hopped on board private jets. Florida-based private aviation company FlyEliteJets, for example, reported a 150% rise in bookings since the start of Covid-19 and private jet charter VistaJet logged a 65% increase in demand for global flight hours across its brands since last March.

According to US aviation manufacturer Honeywell Aerospace, sales of private jets are also up, with aircraft manufacturers reporting a strong increase in orders since the pandemic. The company forecasts up to 7,400 new business jet deliveries worth $238 billion in the next decade.

"Business aviation has proved to be flexible and reliable and it's got strong safety and security measures that have been in place during the pandemic," says Timothy Hawes, managing director at Tarsus Middle East, which organized Dubai Airshow 2021.

The event, which was the first big gathering of the aviation industry since Covid-19, boosted confidence across the whole industry, Hawes tells CNN. Despite apprehension over the amount of business it would generate, he says that more than $78 billion worth of deals were secured or announced during the five-day event and it attracted more than 100,000 visitors.
"It was an excellent opportunity for people to come together face to face who haven't had that opportunity over the last 20 months," he says. "The Dubai Airshow was really that focal point that everyone was waiting for in the industry."

Luxury jets generated a lot of visitor interest, he adds. Among the 175 aircraft on display during the event -- representing all sectors from commercial to military -- was Airbus Corporate Helicopters' vegan helicopter.
The company had fitted out the interior of its newest luxury model, the ACH145, with ultraleather, a synthetic material that mimics the real thing, on the request of wealthy clients Urs and Daniela Brunner. According to Airbus, this was in keeping with the ethical values of Daniela, whose fashion label Giulia and Romeo uses no animal products and donates profits to animal welfare.

Environmental cost
However, the uptick in private jets comes despite concern about their disproportionate impact on climate change. Private jets emit five to 14 times more carbon dioxide per passenger than commercial flights, according to clean transport campaign group Transport & Environment.

It's not known what the emissions per passenger would be for Lufthansa Technik's Explorer concept. The Airbus A330 typically carries more than 250 passengers, but the Explorer is designed for 12 VIPs, although its creators say they may develop other variants that could take up to 47.

Timm admits that to have a "green fingerprint" it would not make sense to fly with so few people, but says that "those people who want to do it, will do it."

He adds that some VIP clients are taking steps to be more eco-friendly, for instance, asking for recyclable material to be used in the cabin, and requesting new types of aircraft that are more fuel efficient or have fewer engines.

But ultimately higher on their list of priorities is comfort, security and privacy, says Timm, and while demand is there, airlines and manufacturers will continue to meet it.